This was originally posted on February 28th, 2018 on Medium

Git’s rebase command is a common source of fear and confusion for Git users, especially those whom may have come from a more centralized version control system. That’s normal. Rebase is a weird, magical looking beast that just comes in and starts changing history willy-nilly.

Rebase is sort of like pointers; it is this confusing construct that everybody talks about but you have no idea why anybody would use it and then suddenly everything will click and the whole idea becomes glaringly obvious and incredibly simple.

I am here to force that click onto you so you can go into work and spread the wonder that is git rebase.

What Even is a Rebase?

Git Rebase is a tool that can be used to take some commits that were made in one place and just pretend they were made in another place all along.

OK but what does that mean?

Let’s look at an example. We have two branches in this repository: master and feature/foo. feature/foo was branched off of master and some commits were made on feature/foo. master has moved on because the world doesn’t just stop when you aren’t looking. 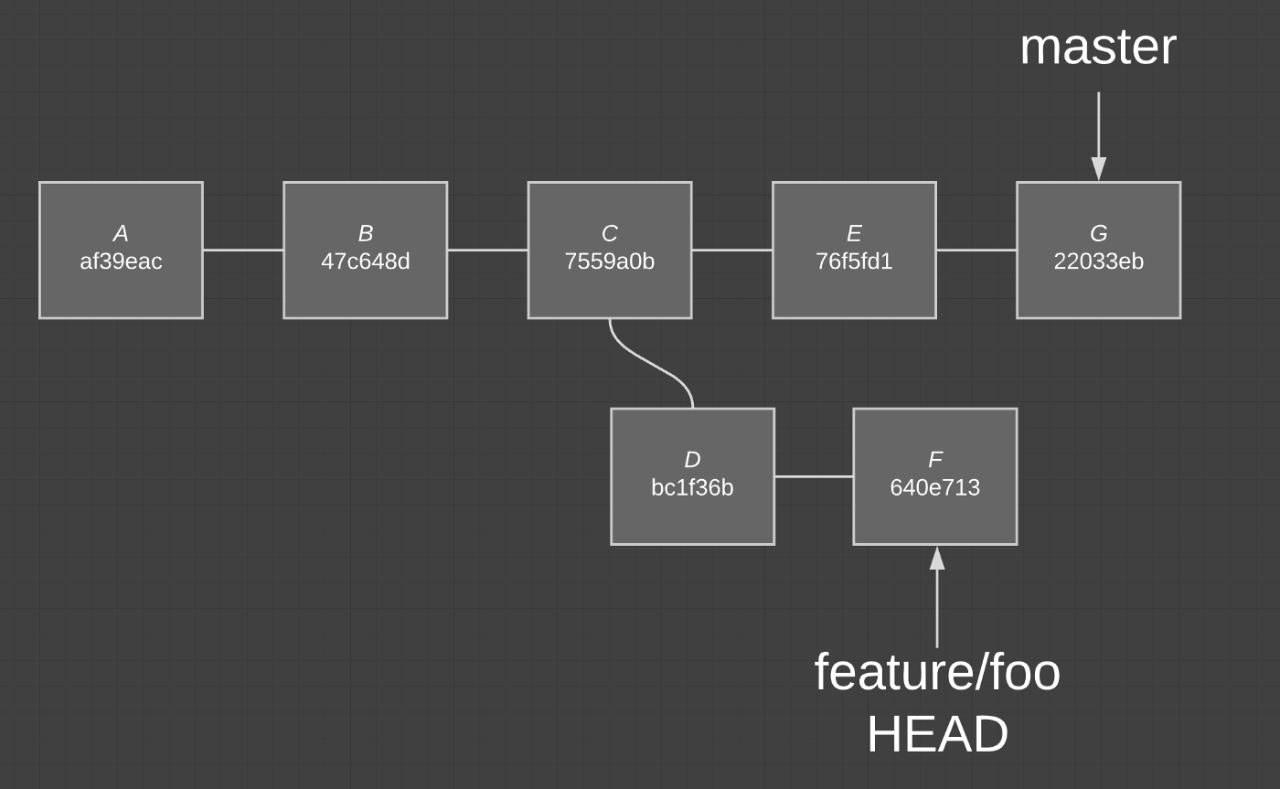 We want to integrate the changes from master into feature/foo but we don’t want to deal with having a pesky merge commit every time we perform this integration.

Rebase is a tool that gives you the power to integrate changes that happened on the source branch without performing a merge, and thus without having a merge commit.

Commits D and F have been replayed on top of master, which is currently pointing at commit G. You will notice that these commits are actually named D` and F` and the commit SHA-1 is different. Why is this?

Commits are Immutable in Git

A commit has a few properties that are relevant here: a parent commit, a timestamp, and a snapshot of the repository at the time of the commit (commits are not just changesets). These values are what Git uses when it computes the SHA-1 that identifies a commit.

Since commits are immutable and a SHA-1 should uniquely identify a single commit, Git has to create new commits that contain the same repository snapshot as the original commits, but each with a different parent commit and timestamp.

This leads to new commits that look identical to the original commits, but have different SHA-1s.

How does Git know what commits to move when we run git rebase master from feature/foo?

Let’s first look at a Venn diagram of the commits on each branch. 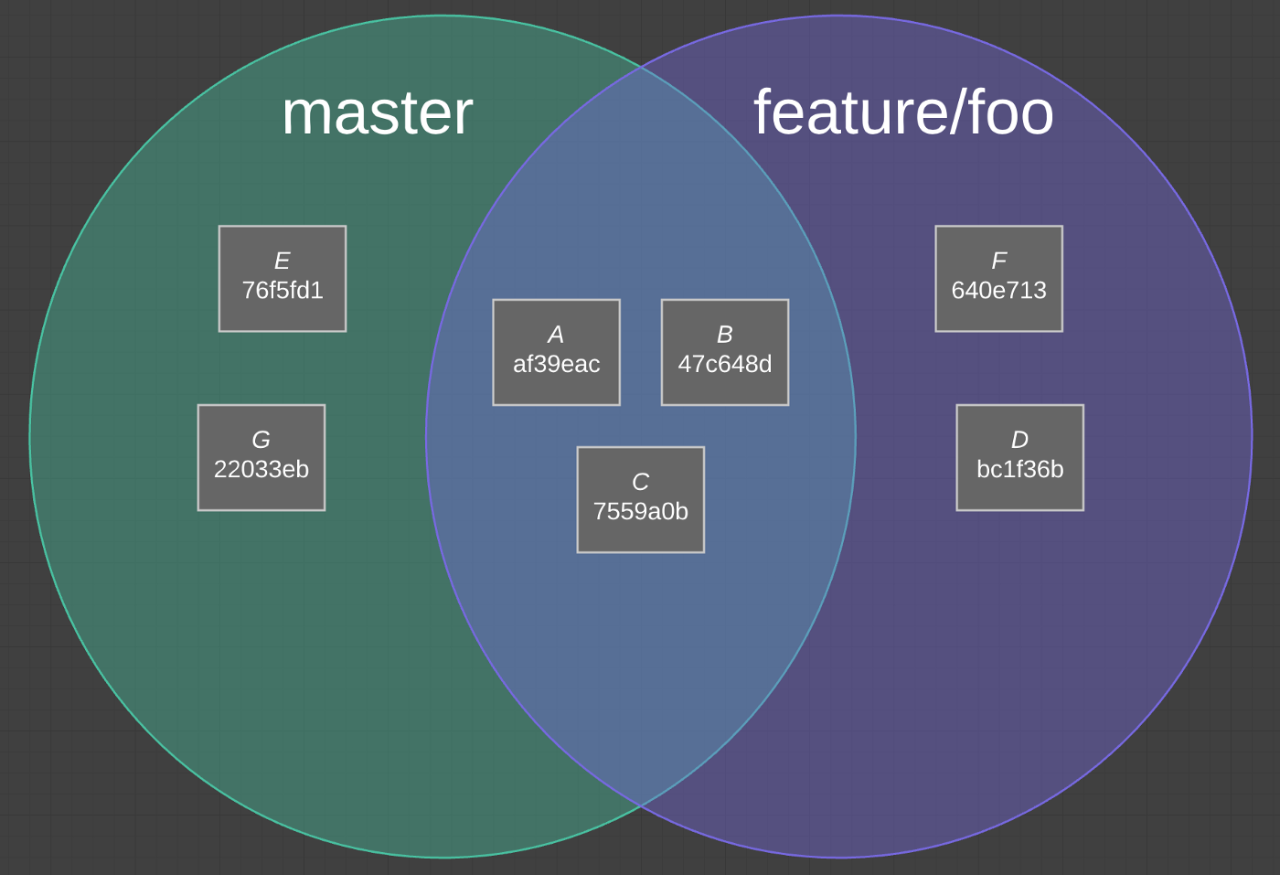 Git will perform a set subtraction, {commits on feature/foo} — {commits on master}, to find the right commits. This results in commits D and F. 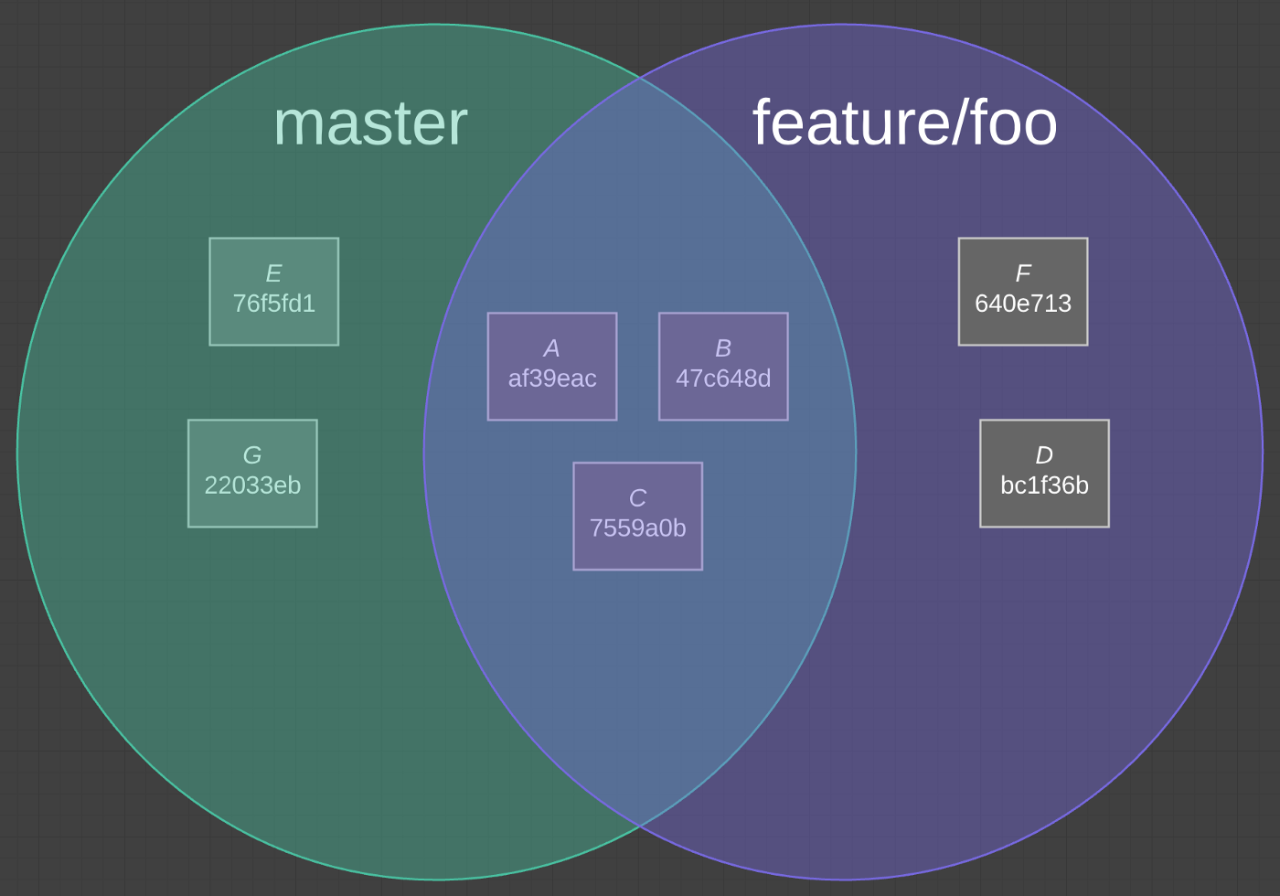 Can we prove this?

Yes! An easy way is to use git log to see the exact commits that we get from this set subtraction.

This looks good so far. Let’s get a wider view to make sure I’m not yanking chains.

If we now perform a rebase onto master, we should see commits 76f5fd1 and 22033eb immediately before the commits that were made on feature/foo.

Does this look familiar?

We now have a nice linear history. You should be able to see how a fast-forward merge would happen at this point.

The rebase strategy has the added bonus of knowing that if your CI pipeline passes on the feature branch, it will pass on main branch post-merge. With a non-linear merge strategy, you do not have this guarantee.

If feature/foo were already pushed and another push is attempted after this rebase, Git will very politely decline to do the push. Why is this?

Git will do everything it can to prevent an accidental overwriting of history, which is a good thing.

Let’s look at what Git thinks feature/foo looks like on the remote repository. 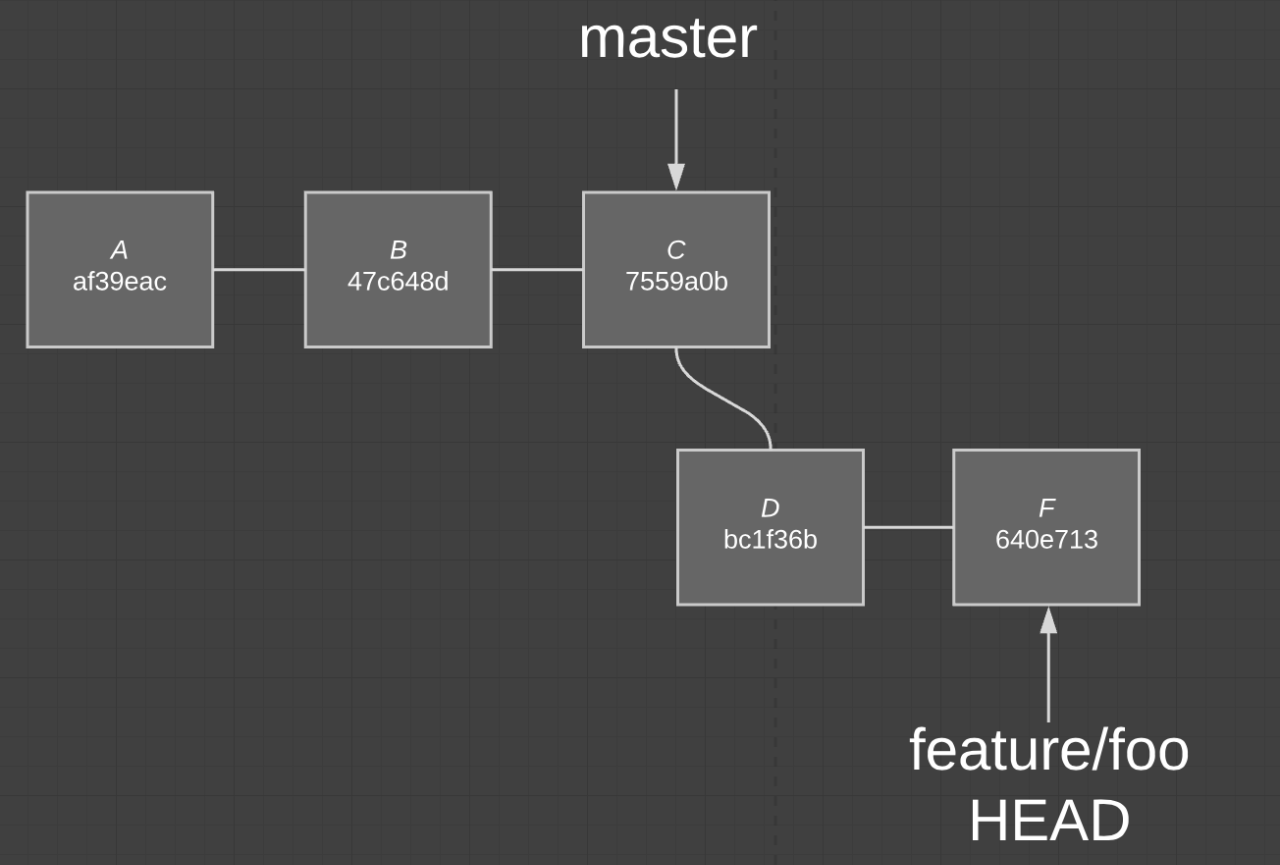 Now let’s look at what we’re telling Git to do.

From Git’s point of view, commits D and F are about to be lost. Git will give you a nice message along the lines of Updates were rejected because the tip of your current branch is behind.

You might say, “But I can clearly see in the nice picture that you made, feature/foo is further ahead than what it was before.” This is a good observation, but Git just sees that feature/foo on the remote repository contains bc1f36b and 640e713 and your local version of feature/foo does not contain those commits. So in order to not lose these commits, Git will politely decline a normal git push, requiring you to perform a git push --force.

If you take away one thing from this article, remember that at its core, rebase just finds commits that were made on some branch and creates new commits with the same content but with a new parent or base commit.